High chromium steel casting is the abbreviation of high chromium white anti-wear cast iron. It is an anti-wear material with excellent performance and special attention; it has much higher wear resistance than alloy steel and much higher than general white cast iron. Toughness and strength, it also has good high-temperature resistance and corrosion resistance, combined with convenient production and moderate cost, and is known as one of the best anti-abrasive materials in the contemporary era.

Qiming Casting is one of the most important chromium steel casting foundries in the China markets. We manufacture more than 10, 000 tons of chromium wear parts for the quarrying, mining, and cement industry. 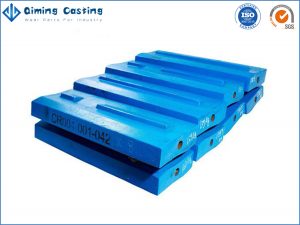 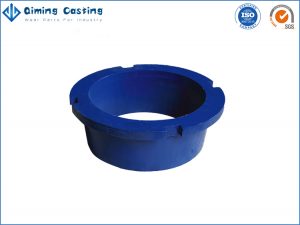 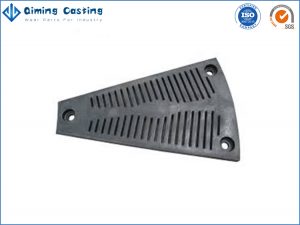 There are mainly four types of Cr-Mo high-alloy white cast irons in the Chinese National Standard and the chemical compositions are given in the following table.
Among these, the medium chromium white cast iron (KmTBCr8) is a wear-resistant material with Chinese characteristics, especially the high silicon to carbon (Si/C) ratio. Medium chromium white cast iron and medium chromium-silicon white cast iron (both belong to KmTBCr8) have been widely used in China. The main features of these irons are the alloying of carbon and chromium to give a ratio of Cr/C ≈ 3, and the formed eutectic carbide is of the type M7C3, thus giving the irons an excellent combination of properties and a higher performance/price ratio.
The KmTBCr12 has limited hardenability, so it is not normally heat-treated, except for stress relief. The as-cast matrix structure is pearlite (which has good impact fatigue strength) and M7C3 eutectic carbides. KmTBCr15Mo is a type of high chromium white cast iron, which has been studied deeply and is widely used. It is normally air quenched and tempered and has high hardness, strength, and toughness, with excellent resistance to corrosion and impact abrasion. KmTBCr20Mo iron has high chromium content and thus a higher Cr/C ratio; hence, it has better hardenability, hardness, toughness, and corrosion resistance. This iron is suitable for thick section components used under certain impact and wet abrasion-wear conditions.

The KmTBCr12 has limited hardenability, so it is not normally heat-treated, except for stress relief. The as-cast matrix structure is pearlite (which has good impact fatigue strength) and M7C3 eutectic carbides. KmTBCr15Mo is a type of high chromium white cast iron, which has been studied deeply and is widely used. It is normally air quenched and tempered and has high hardness, strength, and toughness, with excellent resistance to corrosion and impact abrasion. KmTBCr20Mo iron has high chromium content and thus a higher Cr/C ratio; hence, it has better hardenability, hardness, toughness, and corrosion resistance. This iron is suitable for thick section components used under certain impact and wet abrasion-wear conditions.

The high chromium irons (Class III of ASTM A532), are generally purposed irons, also called 25%Cr irons, containing 23 – 28%Cr with up to 1.5%Mo. To prevent pearlite and attain maximum hardness, Mo is added in all but the lightest-cast sections. Alloying with Ni and Cu up to 1% is also practical. Although the maximum attainable hardness is not as high as in the Class II Cr-Mo white irons, these alloys are selected when resistance to corrosion is desired. In many applications, they withstand heavy-impact loadings, such as from impact hammers, roller segments, and ring segments in coal grinding mills, feed-end lifter bars, and mill liners in ball mills for hard-rock mining, pulverizer rolls, and rolling mill rolls.

Because of castability and cost, Qiming Casting castings can often be used for complex and intricate parts in high-temperature applications at considerable savings compared to stainless steel. These cast iron grades are alloyed with 12 – 39 wt. %Cr at temperatures up to 1040oC for scaling resistance. Cr causes the formation of an adherent, complex, Cr-rich oxide film at high temperatures. The high Cr irons designated for use at elevated temperatures fall into one of three categories, depending on the matrix structures:

The C-content of these alloys ranges from 1 – 2%. The choice of an exact composition is critical to the prevention of sigma-phase (σ-Fe) formation at intermediate temperatures and at the same time avoids the ferrite-to-austenite transformation during thermal cycling, which leads to distortion and cracking. Typical applications include recuperator tubes, breaker bars and trays in sinter furnaces, grates, burner nozzles, and other furnace parts, glass moulds and valves seats for combustion engines.

Nickel-chromium (Ni-Cr) irons are containing Ni and Cr. The Ni-Cr white cast irons, which are low chromium alloy contain 3 – 5 wt. %Ni and 1 – 4 wt. %Cr, with one alloy modification which contains 7 – 11 wt. %Cr. The trade name Ni-Hard types 1 – 4 normally identifies them. Chromium at lower concentrations (<2 – 3%), has little or no effect on hardenability, as most of the chromium is tied up in the carbides.

Ni-Cr white irons are also known as martensitic white cast irons and the martensitic Ni-Cr white cast irons are consumed in large tonnages in mining operations, such as ball mill liners and grinding balls. Ni is the primary alloying element because at levels of 3.0 to 5.0%, it is effective in suppressing the transformation of the austenitic matrix to pearlite, thus ensuring that a hard martensitic structure (usually containing significant amounts of retained austenite) will develop upon cooling in the mould. Cr is included in these alloys, at levels from 1.4 – 4.0%, to ensure that the irons solidify carbides (M3C-type), that is, to counteract the graphitisation effect on Ni.

Abrasion-resistant structures containing eutectic mixtures of austenite and carbides can be obtained in thin and thick section sizes independent of the use of chills. It is possible to obtain traces of graphite in thicker sections or when higher levels of carbon and silicon are employed. Barring these circumstances, the dominant microstructure of Ni-Hard iron is one composed of a ferrous matrix surrounded by hard metal carbides.

The presence of 3 – 5 wt. %Ni allows eutectic austenite to reach the martensite start (Ms) temperature unhindered by the formation of pearlite. No transformation is perfect and as-cast Ni-Hard iron microstructure will contain a mixture of austenite and martensite. If the casting is of variable thickness, then thicker sections might contain traces of pearlite. From this discussion, it is obvious that it is quite difficult to make predictions about the wear performance of the casting, which is based on initial chemistry, with little or no knowledge about dimension or thermal history.

For applications requiring a high degree of strength, hardness and wear resistance, Ni-Hard cast irons are among the effective material available. Ni-Hard iron castings have shown outstanding in a variety of severe applications including work rolls for hot steel milling. High chromium cast irons and high-speed steel type alloy are also widely used in steel plant, and Ni-Hard iron is generally used in finishing stands. The optimum composition of Ni-Cr white cast iron alloy depends on the mechanical properties required for the service conditions and the dimensions and weight of the casting. The Ni-Cr white cast irons have proven to be very cost-effective materials that are used for crushing and grinding.

The predominant characteristics of Ni-Hard irons are that their high strength and toughness can be achieved when heat-treated at relatively low temperatures. Low temperatures for heat treatment are favourable for large castings that are not suitable for heat treatment at higher temperatures and are prone to cracking. Of all the abrasion-resistant irons, Ni-Hard is produced in the largest tonnage for a variety of mineral processing industries. Ni-Hard iron’s low costs are due to its low alloy content, its ability to be cast into a variety of shapes and its high hardness in the as-cast condition. Its high hardness is what clearly separates it from pearlitic abrasion-resistant cast irons. High hardness results from the formation of martensite versus pearlite in the as-cast condition. This metallurgical shift is the result of Ni-Hard iron’s high Ni content.

In Class I Type A, the castings in applications require maximum abrasion resistance, such as ash pipes, slurry pumps, roll heads, muller tires, coke crusher segments, classifiers, etc. Type B is recommended for applications requiring more strength and exerting moderate impacts, such as crusher plates, crusher concaves, and pulverising pegs. Class I Type D, Ni-Hard Type 4, has a higher level of strength and toughness and is therefore used for the more severe applications that justify its added alloy costs. It is commonly used for pumps volutes handling abrasive slurries and coal pulveriser table segment and tires.

The Class I Type C alloy (Ni-Hard 3) is specially designed for the production of grinding balls. This grade is both sand cast and chill cast, chill casting has the advantage of lower alloy cost, more important, provides a 15 – 30% improvement for 8hrs at 260 – 315℃. There are two general types containing 4%Ni-2%Cr, and 6%Ni-8%Cr. Both have a structure of iron and chromium-carbides in a matrix of martensite and bainite, but the higher alloy content materials have a type of carbide that is discontinuous and confers greater impact and corrosion resistance, i.e. M7C3 type of carbide. These irons can be used as cast, but heat treatment improves the hardness and resistance to surface cracking and spalling.

These irons are for abrasion resistance application and the chromium-molybdenum (Cr-Mo) irons (Class II of ASTM A532) contain 11 – 23 wt. %Cr, up to 3 wt. %Mo and are often alloyed with Ni or Cu. They can be supplied either as cast with an austenitic or austenitic-martensitic matrix, or heat-treated with a martensitic matrix microstructure for maximum abrasion resistance and toughness. They are usually considered the hardest of all grades of white cast iron. Compared to the lower alloy Ni-Cr white irons, the eutectic carbides are harder and can be heat treated to achieve castings of higher hardness. Mo, as well as Ni and Cu when needed, is added to prevent pearlite and to ensure maximum hardness.

Wear is a significant problem faced in many industries, and replacement of worn parts can result in considerable costs arising from the cost of the replacement components, labour and loss of production time, and reduced productivity from capital equipment. To minimise these costs and attendant downtime of equipment, wear resistant materials are commonly used in high wear environment. One of the most commonly used groups of materials for wear resistance is high chromium white cast irons (HCWCI) alloys.

The irons under this heading have the highest Cr-content within the high-alloy white cast iron family. High Cr gives these irons good wear resistance, corrosion resistance, impact toughness and hardenability. The resistance to corrosion and abrasive wear, and wear at elevated temperature are also remarkably improved [16]. Class I and II of high chromium white irons are superior in abrasion resistance and are used effectively in impellers and volutes, impeller blades and liners for short blasting equipment, and refiner disks in pulp refiners.